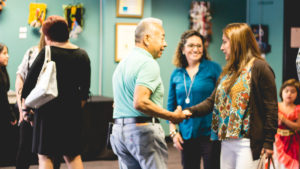 In these posts, I’ve been pleading for us to regain our passion for evangelism. I’ve found through experience that such a call will garner hearty “amens” from some quarters. I’ve also learned that some of those enthusiastic affirmations come from people who are not prepared to deal with what God may bring as a result. Their vision of evangelistic growth comes straight from the church ads I remember seeing in the 1960s—a Mom and Dad with two perfectly-scrubbed kids approaching a church building, joyful anticipation beaming from their smiling faces. Mom’s dress is mid-calf length and adorned with a corsage; Dad wears a suit with a skinny tie and a hat. The ad proclaims in bold letters, “A Warm Welcome Always Awaits You at the Church of Christ!” In short, many who say they desire a greater emphasis on outreach expect to see the same kinds of people being drawn to church that were attracted through evangelistic witness several decades ago: people who share our middle-class, suburban, mid-century values.

Church must no longer be about what I like, what I want, what makes me feel comfortable, safe, and unthreatened. It’s about carrying the most important message ever to a world of hurting, suffering people.

Unfortunately, the family pictured in the ad moved away years ago and no one has seen them for a long, long time! By contrast, when the gospel connects with our communities today, we can expect to see an influx of people who are significantly different from us in dress, mannerisms, sensitivities, family structure, race, and even language. That was certainly the result when Peter shared the gospel with a Roman centurion named Cornelius (Acts 10). Cornelius’ entry into the church was the leading edge of a shock wave that was unsettling, to say the least, and that forever changed the fundamental character of the church. Cornelius was not at all like the existing church members, all of whom were Jews. He was a Gentile! Throughout the rest of the New Testament, we see the church struggle to accept, embrace, and assimilate Gentiles into the body. Even Peter himself came under withering fire for his role in opening the church to such “undesirables.”

But that’s the result we can expect when we get serious about communicating the gospel to the secular world around us. There are already places where the membership has already taken on an “atypical” look. There’s the church in Duncanville, Texas, where, because God has opened a door for ministry to motorcyclists, significant numbers of members sport tattoos and ponytails. Another church in Atlanta that looks very different than it once did after reaching large numbers of cocaine addicts. Then there’s the church in an affluent Dallas suburb that has led numerous women out of the sex trade and into a relationship with Jesus. None of these congregations has made the transition easily or free from hassle. They still face challenges over how to assimilate still-struggling sinners into the life of the church without compromising the call of a holy God. But they help the rest of us, who say glibly that we long for a renewed emphasis on evangelism, to count the cost.

We need a deep conviction that everyone is worth saving.

I would suggest that any church that is serious about reaching the secular world around it must be prepared to make at least four fundamental shifts in thought and practice: