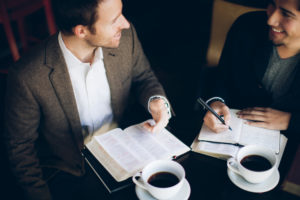 At one time, what passed for evangelism among us was the task of winning religious arguments with people who shared our worldview and many of our core beliefs, including the authority of Scripture. But now, we find ourselves surrounded by a culture that no longer accepts our worldview and does not understand our religious language. We hear loud voices from our culture that set us on edge: “We want abortion on demand;” “We need to celebrate and protect legal right to same-sex marriage;” “Marijuana ought to be legal;” “We want to revel in all kinds of immoral behavior.” We are acutely aware of the vast and growing divide between people of faith and an unbelieving world. How are we to bear faithful witness in such a world? We can’t even imagine having a civil conversation with such people; the thought of engaging them in meaningful spiritual dialogue seems impossible. So we don’t try.

I suggest that gospel message can be communicated across cultural divides like the one we now face. In fact, the gospel has been crossing cultural boundaries since the earliest times. The first significant leap involved an orthodox Jew sharing the message of Jesus with a Gentile—a soldier in the army of the occupying Roman state, no less. There is no way to overstate the depth of the distrust and disdain that Jews and Gentiles had for one another in the first century. The Jewish stereotype of Gentiles held that they were morally corrupt by nature and unworthy of God’s attention. A well-known Rabbi of the time taught that God had created the Gentiles for the sole purpose of stoking the fires of hell.

The clear message is that among the godless masses around us, there are those who are sensitive to spiritual matters. We may not know who they are, but God does, and he is at work in their lives.

And yet, in Acts 10 we find the amazing story of a Gentile coming to faith and being accepted into the previously all-Jewish ranks of Christ-followers. I find some insights in this story that help me re-imagine the task of evangelism in our secular society.

I believe it’s significant that the story does not begin with the insider, Peter, but with the outsider, Cornelius. Though not part of “the chosen people,” he is praised for his devotion, generosity, and spiritual life. God made a special appearance to him to guide him on the crucial next step of his journey. The clear message is that among the godless masses around us, there are those who are sensitive to spiritual matters. We may not know who they are, but God does, and he is at work in their lives. This should give us serious pause before we write off whole groups of people by means of our prejudicial stereotypes. There are purple-haired, pierced punks who are open to God’s call. There are people who are known to God in the midst of profane, beer-guzzling rednecks. God is at work in the lives of some in the gay and lesbian community. God is active in the lives of some hard-core social liberals. Among the godless throngs, we may not know who is being called into deeper spiritual awareness, but God will show them to us if we are open to the possibility.

Only after God makes the point of the vision explicit does Peter understand: God is at work among those we see as unclean and he calls us to move outside our walls of separation to interact with them.

Which leads us to the character of Peter in this drama. Though he was personally present when Jesus commanded his apostles to make disciples of all nations, he is not the one who takes the initiative in this story. God takes the initiative through his appearance to Cornelius. Further, God moves to bring about a fundamental change in Peter himself, because Peter is not capable of playing his part in the story until that change takes place. While Peter is in a trance, God commands him three times to violate the kosher dietary law. Since living a life of strict separation from everything and everyone “unclean” was fundamental to the Jewish piety of the day, Peter refuses. Standing firm on his flawed understanding of the law, Peter issues a flat denial to the lawgiver himself! The irony in the story couldn’t be any sharper. The “godless” Gentile willingly receives and follows God’s promptings while the “righteous” Jew cluelessly resists God’s leading.

Only after God makes the point of the vision explicit does Peter understand: God is at work among those we see as unclean and he calls us to move outside our walls of separation to interact with them. I’ll leave the reader to speculate about the extent to which the same dynamic may be happening today: seekers outside of Christ faithfully following what light is available to them while disciples of Jesus are in the dark about the important role God has ordained for them to play in leading those very people into a relationship with Him.

“The Rep took time to find out history and backstory and then implemented advice and wisdom in such a caring aspect. Very enjoyable and amazing influential strength with people.”