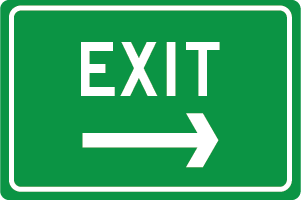 On a freeway, most exit ramps look the same. A sign gives you warning an exit is available in one mile. A right-hand lane allows you to slow as you turn onto the exit ramp. The ramp banks gently away from the freeway and towards an intersection with some lesser road. You come to a stop. You turn left or right towards your final destination.

Boring, perhaps. But the point is not excitement; it is predictability. Every exit is the same and encourages the same behaviors in every driver: turning, slowing, stopping.

An “exit ramp” from the decision-making-freeway functions in much the same manner. When a decision is made, we drive it off the freeway in very consistent, very predictable ways. Not much excitement. But neither are decisions made and then abandoned without consideration of how to communicate, implement, and evaluate them. The decision-making freeway of too many leadership groups looks like a scene from a disaster movie: decisions pulled off to the shoulder or abandoned in the middle of the road … stalled, stopped, stymied.

I know a leadership group who debated, agonized over, and finally made a decision about changing their congregation’s Sunday morning schedule. And then the decision sat there for eighteen months. No communication with ministers (who had initiated this discussion) or the church. No implementation or plans for implementation.

A decision was made but nothing happened. Just another abandoned vehicle on the decision-making-freeway.

You can probably cite other examples of this tendency to decide and drop. Leadership groups do it all the time. Not from fear of consequences or any bad motive. They simply have no consistent, reliable process for getting a decision off the freeway and into real life.

Discussing an issue, deciding an issue, is about half the work required of leaders. But the other half involves checking off some simple steps that should be taken with every decision. Boring, perhaps, but predictable. And in the decision-making process, predictability is our friend.

Read over the chart below and then let’s consider a few basic questions that need to be asked before a decision is “parked” for good.

A decision is pretty useless if it is not communicated, implemented, and—eventually—evaluated. Decisions are meant to be acted on … they are meant to make a tangible difference.

Some Boring but Predictable Questions

A decision is pretty useless if it is not communicated, implemented, and—eventually—evaluated. Decisions are meant to be acted on … they are meant to make a tangible difference. So how can we ensure that a decision—once made—does not simply get parked on the shoulder of the freeway and abandoned?

Once again, we turn to the “owner” of the particular issue being considered and decided (see article about the decision-making On Ramp) to provide a fundamental service to the leadership group as a whole. It is the owner’s final responsibility to ensure a decision reaches its intended destination by asking a few basic questions and providing a plan for bringing that decision to life.

How do we communicate this decision?

A decision uncommunicated is no decision at all. Like a tree falling in a forest with no ear to hear, such decisions make no sound. There are a few matters to consider as you think about communication:

I don’t recall ever consulting with a leadership group that felt good about the way they communicated with members of their congregation. Communication is difficult. It takes planning and repetition. But unless leaders do the boring yet necessary work of thinking through a communication strategy—for every decision they make—more than a few of their decisions will fall through the cracks and die.

How do we implement this decision?

Good implementation of even the simplest decisions requires a plan. Stephen Covey’s adage “Begin with the end in mind” leads to a few more questions worth asking as you develop that plan:

Eventually, no plan is complete until it meets your calendar:

One last thing. There is no implementation without monitoring. Even when someone else is charged with the responsibility for implementation, it is the “owner’s” continuing duty to monitor progress and help manage problems.

How do we evaluate a decision?

The decisions of church leaders are not laws written on tablets of stone and brought down from Mount Sinai—immutable, eternal, unchanging. They are—in the end—products of flawed leaders, subject to changing circumstances, and often in need of adjustment. Which means decisions need to be reviewed and evaluated on occasion.

Why not get into the habit of putting a decision on the leaders’ agenda three months after its implementation deadline? This is a chance to dust off the decision, review its impact and implementation, and learn from mistakes. A few minutes reviewing past decisions will train a leadership group in making better decisions in the future. Leaders who do not learn from their decision-history are doomed to repeat it.

How do we rescind a decision?

Once in a great while, church leaders make bad decisions. I know, it seems inconceivable, but it does happen. Is there a process for reconsidering and revoking decisions that were wrong-headed or poorly implemented or resulted in unintended consequences?

I’m not talking about the second-guessing and hand-wringing that so often results from “decision-remorse” (to which church leaders are particularly prone). A constant cycle of “debate, decide, doubt and dither, debate some more, vacillate, and undo” is not healthy and wears down leaders to nubbins. Leaders need to learn to make decisions and stick with them.

Except when “sticking with” decisions is more about stubbornness than leadership. There are decisions that don’t deserve leaders’ loyalty. When we bump into decisions like that, what do we do?

We formalize the reconsideration process:

I know this series has involved mind-numbing detail. I realize it’s not a series for every leader and every leadership group. Building this kind of decision-making process, formalizing it in this way, may not be possible or even desirable in some settings and for some churches.

But one thing is true: church leaders make decisions and, when they do, they make those decisions as a group. Some process is required to ensure good and healthy group decision-making. You can take the scenic route if you want to: unstructured, undisciplined, undefined.

But this is how leadership groups make consistently good decisions, effectively communicate and implement them, and—along the way—bolster the integrity, unity, and confidence of the group as a whole.

“The Rep took time to find out history and backstory and then implemented advice and wisdom in such a caring aspect. Very enjoyable and amazing influential strength with people.”