What Time is it at Your Church? (part 2) – Bill Knapp’s Keeps Me Up at Night

Author’s Note: As part of our series on the seasons of a church’s life, I’d like to offer the following piece that I wrote in 2007, when I was preaching for the Church of Christ in Trenton, Michigan. It describes the dilemma a church faces when it wakes up to realize that it have entered a new season in its life cycle. 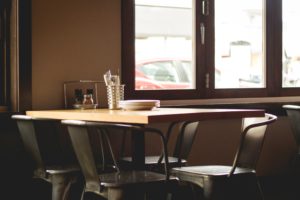 Bill Knapp’s was a Michigan institution. Most of the restaurants in the chain were built exactly alike, so they were instantly recognizable. You could walk into a Bill Knapp’s anywhere in the state and instantly feel at home. The food was good and the menu changed seldom, if ever. And they had a fiercely loyal clientele.

But Bill Knapp’s paid a terrible price for their decades of keeping everything the same. Their loyal customers got older. The college students who worked at our local outlet began calling it the old folks’ home. My wife and I began noticing that there were few customers at Knapp’s younger than we (and we weren’t exactly spring chickens). The chain’s aging demographic must have caught the attention of the folks at corporate headquarters as well. They evidently realized that unless they recruited younger diners, their restaurants would die along with their customers.

So they changed. They tried to attract young families. They installed video games and playtime activities for the younger set. They dropped some old favorites from the menu and updated the fare. They started an advertising blitz with a new slogan: “That was then; this is WOW!” It didn’t work. No amount of décor and advertising could erase the widespread impression that Knapp’s was “your grandmother’s restaurant.”

My hope is that we will pray for His guidance, and then be humbly open to whatever direction He leads.

Even worse, the changes at Knapp’s alienated their traditional clientele. The older folks didn’t like the new décor, menu, or games. Bill Knapp’s is no more. Out of business. Bankrupt. Two miles from our church building sits a familiar-looking building, deserted for years, a mute reminder to past glory. Meanwhile, several newer restaurants nearby flourish.

So why does this keep me awake at night? A recent article in the Christian Chronicle said that Churches of Christ became a “franchise church” during the ‘50s, ‘60s, and ‘70s: you could walk into a Church of Christ anywhere in America and feel right at home. The order of worship was almost identical. The prayers used familiar phraseology. The sermons were drawn from a select group of “our” topics. Many of our buildings looked alike. And the clientele was fiercely loyal.

My hope is that we will pray for His guidance, and then be humbly open to whatever direction He leads. But Churches of Christ are getting older, dramatically so. John Ellas, the leading church growth guru among us, has thoroughly documented the shift. It’s a rare Church of Christ that’s attracting significant numbers of previously-unchurched twenty-somethings. In metropolitan Detroit, I can name maybe one—maybe. What does this mean for our brotherhood, and specifically for my congregation? The solution seems obvious: we need to reach young families. But will we wind up pulling a Bill Knapp’s—alienating our traditional support base while at the same time failing to reach significant numbers of younger families?

That’s what keeps me up at night. In the Trenton church, we’ve made some changes to try to reach a younger crowd. And we’ve lost several of our older members who liked it just fine before we started “tinkering” with things. And yet, within the last two weeks, two more twenty-somethings who grew up at Trenton have announced that they will be attending a different church (not a Church of Christ). Both have significant others who do not share our heritage, and who find us too wedded to unvarying practice, too mired in issues that make no sense to them. To them, we are “your grandmother’s church.”

My guess is that the Holy Spirit has a future in mind for us that none of us can quite envision yet.

But let me not end on such a depressing note. There is a difference between the church and Bill Knapp’s. Knapp’s had a marketing department. The church has the Holy Spirit. The Holy Spirit alone can bring new life. My guess is that the Holy Spirit has a future in mind for us that none of us can quite envision yet. I would be surprised if His future involves us clinging desperately to all the old ways for fear of losing even more longtime members. But I also doubt that He wants to see us caught up in a bunch of gee-whiz, “that was then, this is WOW” church marketing schemes. My hope is that we will pray for His guidance, and then be humbly open to whatever direction He leads. And we need to be courageous enough to put everything on the table for him to either use or jettison: physical facilities, ministry staff, our pet programs—everything. If we can do that, trusting Him fully, then we will have a future.

“[Our IMP Rep’s] preaching was excellent, his ability to present timely material that needed to be addressed was uncanny and very helpful. He was very adept at helping people resolve issues.”