The Graying of our Churches (part 2)

[Interim Ministry Partners (IMP) has the privilege of working intensively with churches across the country—more than seventy-five congregations in the last few years. As a result of our work, IMP is strategically (perhaps uniquely) positioned to observe churches in a wide variety of circumstances and draw out some common themes. This blog series (“Observations on Churches of Christ”) addresses some of those themes and offers a few reflections for those of us who are interested in thinking about the future of Churches of Christ.]

The last blog article looked at often-expressed concerns (and anecdotal evidence) suggesting our congregations are aging, failing to attract younger age-groups, and missing leaders-in-their-prime. This article looks at four churches—from various regions of the country—and examines specific data on aging in these churches. 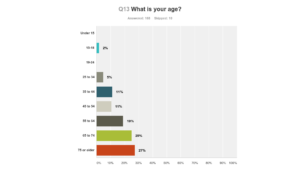 The first congregation is located in central Texas. Their attendance runs a little over 200 on Sunday mornings. 178 of their members responded to our survey. The church has enjoyed a long and effective life. Having lost their minister and recognizing a need for help (both in finding a new minister and in addressing issues related to church health and mission), the leaders of this congregation contacted IMP and partnered with us for about nine months. Our assessment indicated that:

This congregation is not attracting younger believers. Men in their prime leadership years are absent. Membership as a whole is aging—ten years from now, a large majority of this church will be over 65. What do these data indicate for the future of this church? 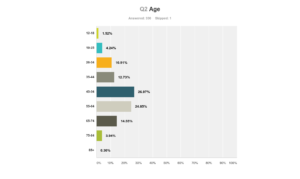 This congregation (about 450 in attendance on Sunday mornings) is one of the largest congregations of Churches of Christ on the east coast. They have a long history of strong leadership and excellent pulpit leadership. They have attempted (creatively and assertively) to reach younger audiences.

IMP partnered with this congregation for over a year as they went through a transition in pulpit leadership. As might be expected, the “age” issue was not as pronounced in this church as in Case #1. Still, this congregation is facing several challenges with the age of its membership.

331 members (almost 75% of the church) responded to our assessment.

This congregation is doing a better job of attracting younger believers, but still not at a rate that could be considered “sustainable” in the long run. (They have almost as many members who are 75 and older as members 25 and younger. Given that research indicates the vast majority of people make significant spiritual faith and church commitments before the age of 25, this statistic is even more telling.) Once again, males in their prime leadership years are underrepresented. (Why are there twice as many females in this age-group as males?) In ten years, a large majority of this church will be over 55. Unless they can find a way to attract and assimilate younger believers in the next ten years, the future of this church is in question. 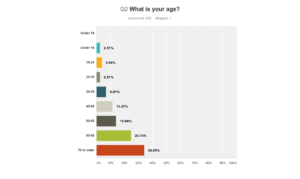 This congregation (about 450 in attendance on Sunday mornings) is located in the mid-West. They have a long history of peace and harmony and have enjoyed strong, effective pulpit leadership.

On the retirement of their long-tenured minister, IMP conducted an “Interim Season Seminar” with this congregation to determine whether they wanted to use our services or launch a search on their own. The elders, in this instance, decided to take a DIY approach.

280 people (62% of attenders) responded to our assessment. The results indicated:

As with Case #1, this congregation is finding it difficult to attract younger believers. (They have more members 70 or older than members under 50.) Again, males in their prime leadership years are underrepresented. In ten years, a large majority of this church will be over 70 years of age. What do these findings say about the future of this church? 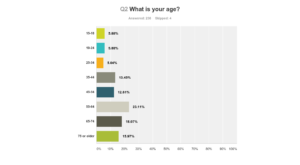 This final congregation (running over 300 in Sunday morning attendance) is one of the largest, strongest churches on the West Coast. IMP partnered with this church for more than a year as they searched for new pulpit leadership. 242 of their members responded to our survey. The results indicated:

Once again, this congregation is finding it difficult to attract younger believers. (Of 242 respondents, only 40 people were less than 35 years of age.) Like the other instances we’ve examined, this is an aging church What do these findings say about the future?

Conclusion:
These specific cases have much in common—they are all graying churches with challenges attracting younger generations of believers. Not every congregation served by IMP faces the same degree of challenge in this regard. (We could provide data on several churches with younger demographics.) But this particular challenge is common in many churches of every stripe.  Congregations all over the country are struggling with similar issues, to greater or lesser degree.

What can church leaders do—in different circumstances and contexts—to assess and address the problem of an aging membership? Here are few suggestions: