A Tale of Two Churches

by Tim Woodroof and 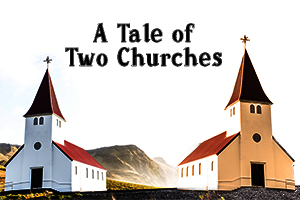 Now fast-forward ten years. One of these churches has flourished. The other … not so much.

Christ’s Church has grown numerically, though that’s not the most important part of its story. CC has enjoyed a prolonged period of peace and impact. Oh, there have been moments along the way, certainly: a few disgruntled members, a ministry or two that never got off the ground. But for the most part, the church is actively sharing faith and changing lives. Members of CC are aware of their spiritual gifts and engaged in various ministries of the church. The tone of worship is grateful and joyful. It is a church looking to the future. The leaders of CC decided long ago they wouldn’t try to be a church for everyone … a church that did everything. It was enough for them to concentrate on a few things, a few ministries, and keep in touch with the surrounding community.

Vision saves a church from merely “good” things by directing it to “best” things.

As a result, Christ’s Church and its members have managed to keep their eye on the kingdom, recognize God at work through them in the world, and experience a unity that comes from working together in ministries that matter and make a difference.

Jesus’ Church, on the other hand, has been in steady decline. The last ten years have been a struggle. Oh, there were some achievements along the way: the occasional baptism, a life touched here and there. But increasingly, the church emphasized doing more rather than doing well. Projects and programs multiplied. There was an ever-expanding list of ministries with an ever-expanding budget. No one paused to ask, “How effective are the ministries of our church?” No one wondered how effectiveness might be measured. No ministries were ever cut or allowed to die of natural causes.

Gradually, members of JC began to question what the church was about and why their involvement mattered. They were active in a wide range of church events; they seemed to stay busy all the time. But everyone was going in so many different directions, JC members lost confidence they were making a meaningful impact. Spinning so many ministry plates became exhausting. And as the exhaustion grew, a critical and nostalgic tone grew with it.

The answer, of course, was to do even more. The leaders of JC renewed their commitment to be a church for every ministry and pay attention to every opportunity. “Why limit what God is trying to do?” they asked each other, though the question became more disheartening as they seemed to have less time and fewer resources available for each new request.

Vision is a reminder of where a church is going. Vision keeps the “main thing the main thing.”

Were the struggles of the second church the result of moral failings or less-than-committed members? No. Were those struggles the consequence of unfaithfulness, some doctrinal impurity? Not at all. Did God ordain a different future for the first church than the second. I don’t think so.

Of all the reasons churches decline or thrive, one reason stands out consistently. Churches rise with vision … or fall in the absence of it. Vision is a reminder of where a church is going. Vision keeps the “main thing the main thing.” Vision shapes the present and, thus, creates the future. Vision feeds the yearning of members to belong to something of significance. Vision provides focus and prevents distraction. Vision saves a church from merely “good” things by directing it to “best” things.

Vision. Does your church have it?

“We had a leader to guide us through the process. We had a focus during the transition. We had a mentor and partner with us.”