The Integrity of “No” 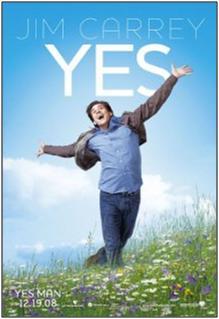 In the recent movie “Yes Man,” Jim Carrey plays the role of Carl Allen, a guy whose life is at a standstill. He’s in a dead-end job, with a just-broken heart, and a not-so-promising future. He is miserable.

Then he attends a self-help seminar where he is challenged to say “Yes” … “Yes” to everything … “Yes” to every opportunity. It revolutionizes his life. Instead of living in fear, with timidity and hesitancy, Carl learns to anticipate life, to see its possibilities, to believe once more that good things can happen if only he is open to them.

Only there’s a twist. Just as Carl is learning the joys of “Yes,” he learns that there is an equally important role for “No.” Saying “Yes” to one thing necessarily means saying “No” to other things. There are opportunity costs that come with saying “Yes.” Buying this car means we can’t buy that one. A commitment to marry one person means (or should mean!) we are not available to marry another.

Carl meets Allison—a unique and free-spirited young woman—and falls deeply in love. He wants to say “Yes” to her. But to say that meaningfully, Carl is forced to confront his “Yes Man” lifestyle. He cannot commit to her without learning to say “No” to things that would hurt her, people who would compete with her, and ideas that would offend her. “Yes” imposes its own necessary “No”. Carl learns that commitment becomes possible only when the one who says “Yes” also has the integrity to say “No.”

The Yes and No of Commitment

Like Carl Allen, there are churches that seem stuck in “No.” They’ve circled the wagons. They’re hanging on for dear life. They’re not having much fun. These churches live in fear, timidity, and hesitancy. They don’t believe in themselves. They don’t believe God expects much of them or can do much through them. They settle for small dreams and say “No” to anything that might involve challenge or risk.

Churches like this need a healthy dose of “Yes.” They need to reacquaint themselves with a great God who has promised to do great things through his church. They need to touch base once again with the world-changing, high-stakes mission of God’s people. No church will ever turn the world upside down by starting with “No,” focusing on limitations and liabilities, and taking a soured, pessimistic view of the church’s ability to affect the world.

There are churches, however, with the opposite tendency: they seem to be stuck in “Yes.” They say “Yes” to everything, to any good opportunity. (See article on The Power of Focus in this series.) Every peripatetic missionary, every worthy cause, every ministry with a heart-tugging PowerPoint presentation receives a hearty “Yes” in such churches. “Yes” to this direction. “Yes” to that direction. A commitment here, a commitment there.

Churches like this often have a healthy respect for God and what he can accomplish through his people. They aren’t driven by fear or timidity but by confidence and a desire to do good. They believe the church can make a positive difference in a negative world. They want to have a God-sized vision. Such churches are often allergic to “No.”

Like Carl Allen, some churches need to be more open to saying “Yes.” But as soon as “Yes” enters a church’s vocabulary, commitments are born, promises are made, and obligations ensue. To say “Yes” (and mean it) requires a church to begin saying “No” again. Churches that want to make meaningful commitments cannot make them without learning to say “No” to things that would hurt those commitments, people and ministries who would compete with those commitments, and ideas that run counter to those commitments. “Yes” imposes its own necessary “No”. Commitment becomes possible only when the church that says “Yes” also has the integrity to say “No.”

Suppose one of you wants to build a tower. Will he not first sit down and estimate the cost to see if he has enough money to complete it? For if he lays the foundation and is not able to finish it, everyone who sees it will ridicule him, saying, ‘This fellow began to build and was not able to finish. (Lk 14:28-30)

Churches are good at starting things. They are not quite so good at finishing them. They make a commitment to some ministry or direction or emphasis with full intention of carrying through on that commitment. But, too often, churches don’t count the cost of a commitment. They don’t go through the deliberate, intentional work of asking themselves the question, “What does this commitment mean about our future? What will it cost us to keep this commitment? Since we’ve said ‘Yes’ to this, what must we say ‘No’ to as a consequence?”

Churches can suffer from a form of “group think” that leads them to believe the normal rules of commitment don’t apply to them. “There are so many people at this church. We have such great resources. And, besides, God will give us whatever we need to keep the commitments we make.” As a result of this sort of thinking (or non-thinking) church convince themselves they don’t have to count the cost. They don’t have to look at their resources and estimate whether they can do what they’ve committed to. They don’t have to peer into the future and recognize how making one commitment limits the ability of a church to make other commitments. They can go in many directions at once.

The result is broken commitments, incomplete commitments, and commitments that flag and fail somewhere short of the goal. The church is littered with foundations that mark the sites of great dreams interrupted, ambitious aspirations suspended, towers planned but never finished.

The predominant reason for such failures lies not in the dream and the plans, nor in a lack of resources or skill, but in an absence of discipline in recognizing and respecting the opportunity costs that arise with any significant commitment—like a mission statement.

A mission statement (when properly valued and implemented across the congregation) is a fundamental and significant commitment to a particular direction or goal. And, because it is fundamental and significant, this commitment comes with substantial opportunity costs. Churches, however large and wealthy, can’t do everything. They cannot run in many directions at once. Members of a church simply cannot wrap their minds and hearts around several emphases, all equally-weighted, all competing for attention and resources. Churches and church members need focus.

Because this is true, saying “Yes” to a particular mission for a church requires that the “Yes” be protected with “No.” When a church commits to a mission, it does not have the luxury of entertaining other options, exploring alternative missions, advancing other agendas. Because we’ve said “Yes” to this understanding of our mission and made a commitment to pursue this direction, we must say “No” (if we have integrity) to other commitments that would compete with or draw attention from the commitment we’ve already made. Failure to do this is the spiritual equivalent of promiscuity.

Unless a mission statement is so valued and integrated into a church that it becomes the basis for making decisions, setting goals, devising plans, and allocating resources … unless a mission statement is protected by a determination to say “No” to good things that don’t fit, or compete with, or dilute the resources and attention we’ve already committed … what we have is not a mission, it is only a statement that fits neatly on our letterhead. What we have is not a commitment to a direction, but a tentative and temporary inclination that can change at the slightest shift of circumstance or interest or personnel.

“No” can (and often does) result from fear or smallness. But, sometimes, saying “No” is a act of integrity, protecting commitments already made from the temptations of the different and the novel.